How does a Jurat get sworn in?

Felicity Quevâtre-Malcic was elected as a Jurat of the Royal Court on Wednesday 26th February 2020, gaining 45 of the 84 votes available.

Being elected as a Jurat is, as the Deputy Bailiff put it, “the greatest honour Guernsey can bestow on a member of the community”. The process is steeped in tradition, but most Islanders have little idea of how it works.

In an earlier article, we described the election itself. Here we follow Felicity as she is notified of her appointment and sworn in:

Immediately after the announcement of the election result, the Deputy Bailiff, as Deputy Presiding Officer of the States of Election, directed Her Majesty’s Sheriff to notify Felicity that she had been elected as a Jurat of the Royal Court at that morning’s sitting of the States of Election, and asked that she present herself at the Royal Court at 9:30am on the morning of Monday 9th March. 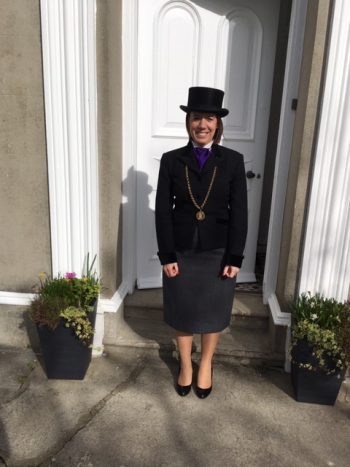 Half an hour later Felicity opened her front door to find H.M. Sheriff, decked out in her top hat and purple cravat, repeating the words of the Deputy Presiding Officer. H.M. Sheriff knew where to find Felicity because all candidates are asked in advance for details of their exact whereabouts on the day of the election.

On the morning of the swearing in ceremony, Felicity was not present in the Royal Court at first. About a dozen Law Officers, Advocates and court officials were seated in black robes in the well of the Court, with family, friends and members of the public in the Public Gallery. The Deputy Bailiff (the Bailiff was off-island) and the Jurats were announced by H.M. Sheriff and took their seats on the bench. After the review and approval of three new pieces of legislation, the Court was ready to receive Felicity. H.M. Comptroller (Junior Law Officer) and the Senior and Junior Jurats were sent to bring her from the precincts of the court into the chamber.

Felicity followed the Senior Jurat into the court, with the Junior Jurat following her, and was asked to approach the bar. Jurat Stephen Jones, as Senior Jurat, presented her to the court in French. Felicity was then asked to move forward to H.M. Greffier’s desk where the Greffier read out a long oath in French which included a reference to “the peril and condemnation of your soul” should she fail to honour her promise to the Court. Having sworn her oath, the Deputy Bailiff declared that Felicity was duly appointed as a Jurat of the Royal Court; and that Jurat Quevâtre-Malcic should leave the court, led by H.M. Sheriff, to put on her robes. 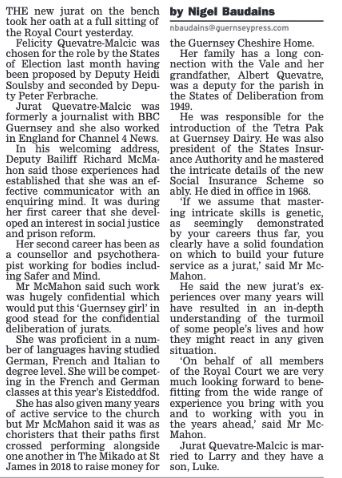 A few minutes later Jurat Quevâtre-Malcic arrived back into the Court through the judicial entry (the door to the top bench), announced by H.M. Sheriff.  She shook hands with the Deputy Bailiff and with each of her fellow Jurats in turn, and then took her seat alongside them (at the end of the row as she is the most junior) and listened as the Deputy Bailiff gave a warm speech of welcome. He described Felicity’s experience and skills, welcomed her friends and family and assured her that he and the rest of the Court would be there to support her. He also acknowledged that the make-up of the Jurats’ bench was changing as more women were appointed.

The Court then continued with its business, hearing from two Advocates who were applying for licences on behalf of their clients. In all, the court session lasted about 40 minutes, after which Jurat Quevâtre-Malcic had her photo taken by the Guernsey Press and adjourned to the OGH with her family and friends for a celebratory cup of coffee. She will sit on her first case in the Summer.

Read more about the role of Jurat.

Who is H.M. Sheriff?

Jayne Limond held the position of Her Majesty’s Sheriff and Her Majesty’s Sergeant in Guernsey at the time of Jurat Quevâtre-Malcic’s election. The Sheriff is now Jason Savident.

Jayne was only the second woman to be appointed to the position and certainly the youngest. Historically the roles of H.M. Sheriff and H.M. Sergeant were held by different officers. However, for many years, they have been held by the same person.

H.M. Sheriff is responsible for keeping order in meetings of the States of Deliberation and the States of Election and carries out the directions of the Bailiff or Deputy Bailiff as presiding officer. H.M. Sheriff attends Royal and Magistrate’s Court sittings in person, or more often by deputy.

The role of H.M. Sergeant is to attend court sessions and keep order in addition to serving summonses and other legal notices. 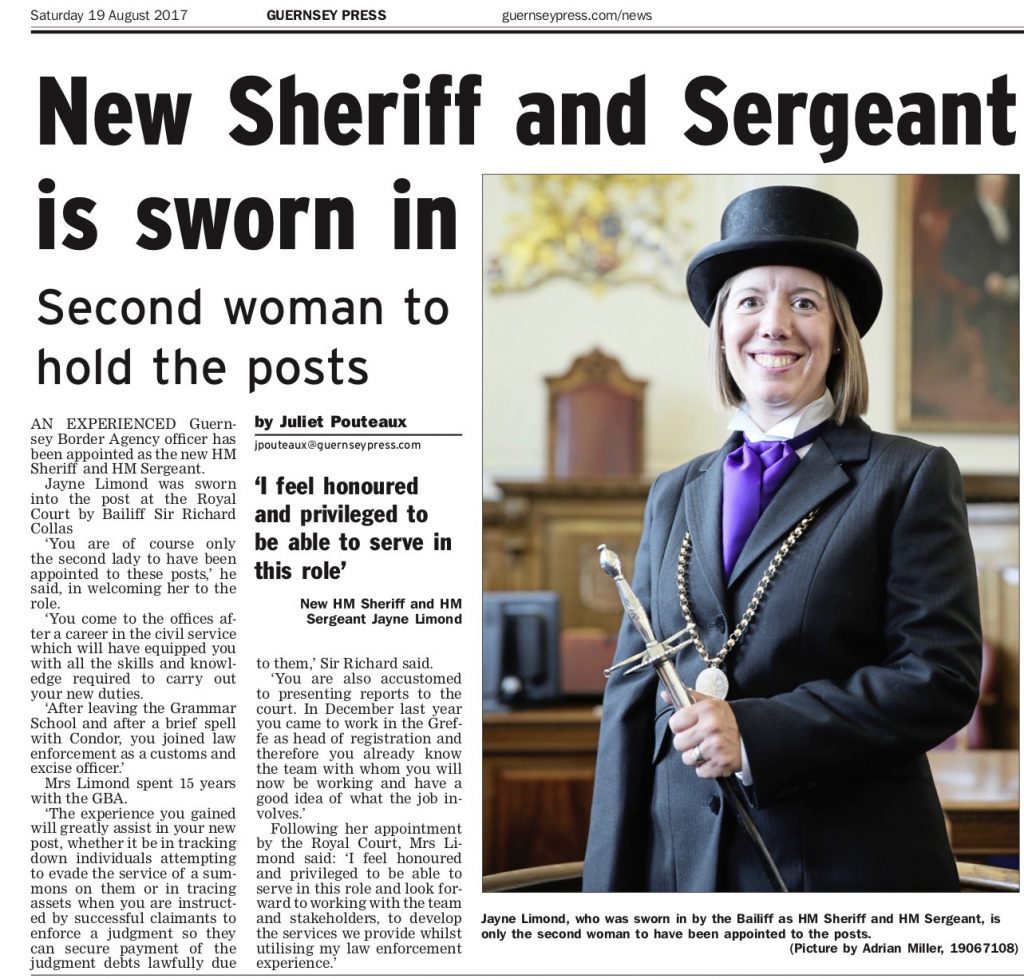 Photo of Jurat Quevâtre-Malcic and Press articles courtesy of the Guernsey Press. 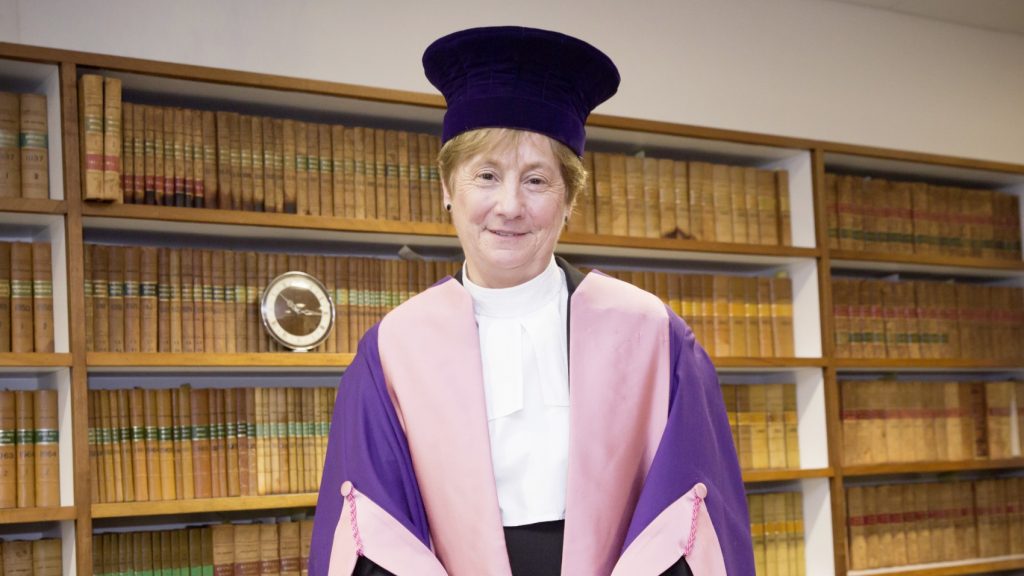