Inspiring women to stand for the States

On Thursday 1 April, members of Women in Public Life and Guernsey’s two Commonwealth Women Parliamentarian representatives met with the States Assembly and Constitution Committee to discuss ways to inspire more women to stand for the States. 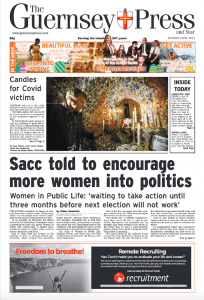 SACC meetings are the only States committee meetings that are open to the media and the discussion made front page news and the Editor’s Comment column.

The meeting was prompted by recommendations of the team of independent election observers commissioned by the States to analyse Guernsey’s first island-wide election.

In their report, the election observers expressed disappointment at the reduction in the number of female deputies in the Assembly from 12 in 2016 to 8 in 2020. They highlighted the “absence of any special measures to increase the participation of women in political life.” 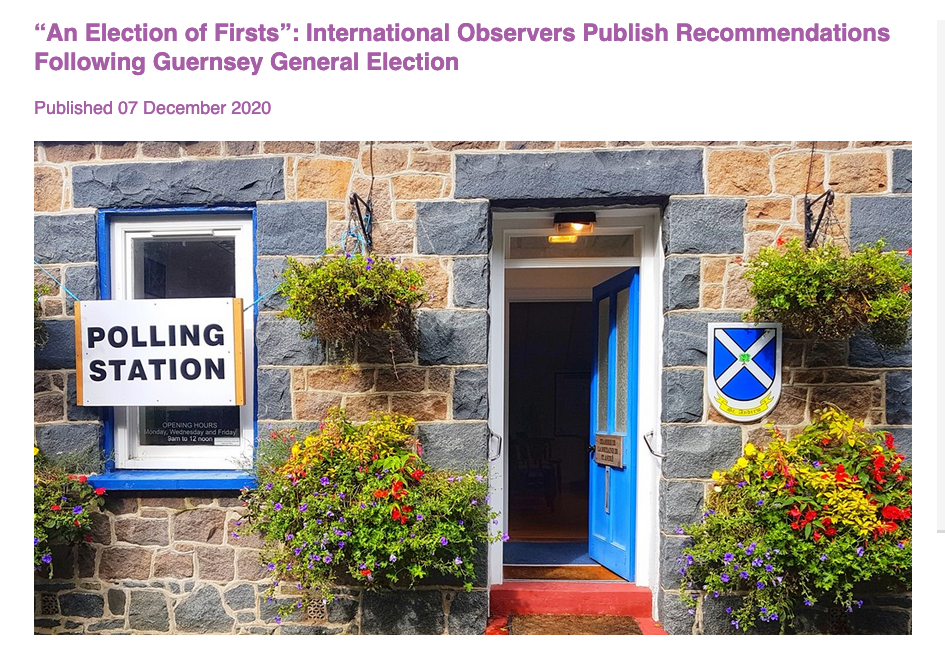 In our presentation we made the following points:

1. Deputy is just one of the roles in public office that Women in Public Life inspires and supports women to consider. Seeing more women stand for Jurat, the Douzaine and Guernsey’s many tribunals and commissions is just as important.

3. Since launching in January 2020, what’s been working for us is: telling women they are wanted; giving them accessible, timely and detailed information; and introducing them to people already doing the role.

4. The information we provide is of considerable interest to the public in general, not just women considering public office, as evidenced by the peak of 400 people a day using our Jurat Election Information Hub. 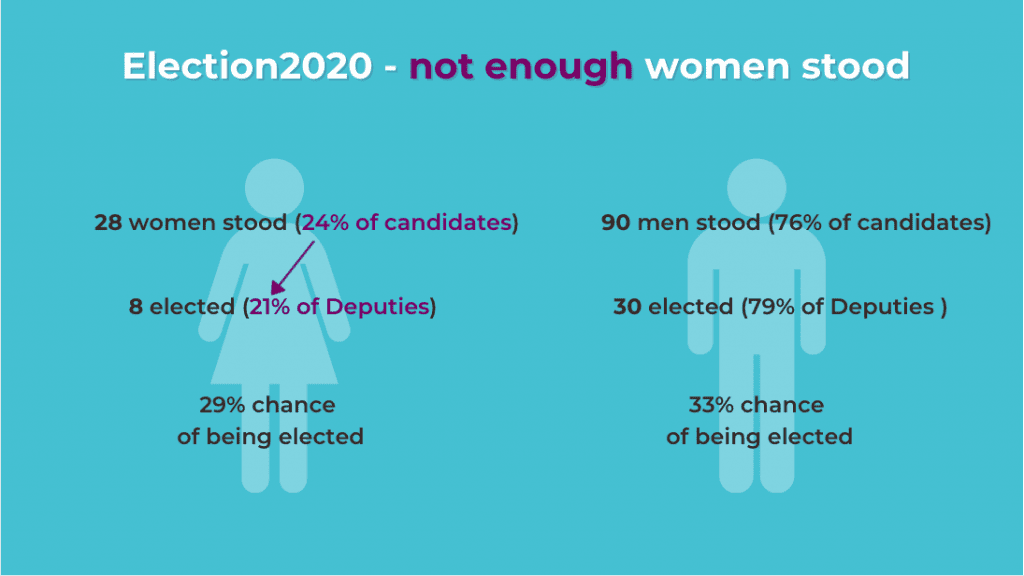 6. Guernsey is supportive of women in leadership. Women have an equal chance of being elected and of leading States committees. But not enough women stand. In 2020, only 24% of the candidates who stood in the general election were women and 21% of the people who were elected were women. If more women had stood, more would likely have been elected.

7. Most people – men and women – don’t want to stand for the States. There are a myriad of reasons: “I’m too busy”; “I don’t have the patience”; “I’ll be criticised”; “The States doesn’t achieve anything” etc. But something stops women more.

8. The best “like for like” study of men and women’s attitudes towards political office that we have found is a US study of over 2000 lawyers, business leaders, educationalists and political activists. The research concluded that women with equal credentials to men were less likely to stand because of (a) traditional family roles (b) not be asked to run (c) underestimating their skills and overestimating the requirements of the role.

9. SACC is not in a position to influence traditional family roles, but it could help overcome (b) and (c) by telling women they are wanted, explaining the role of a States member and offering training to all.

10. In terms of telling women they are wanted, the States clearly has an excellent Comms Team who could devise and run a compelling campaign to encourage more women – and other under-represented groups – to stand.

11. In terms of training, we recommended that an information and training programme, available to everyone, begin as soon as possible rather than waiting until just before the election. It should make use of online modules to capitalise on the general public interest in public office (see point 4). It should be specific about the requirements of the role.

12. SACC has limited resources but could call on the IoD and Chamber of Commerce for support as businesses are well-versed in tackling boardroom diversity. The election observers also recommended that Guernsey create a permanent election resource, rather than starting from scratch with a completely new team at each election. This permanent election resource could assist with project managing communications and training.

13. SACC can also learn from Jersey. Their election is in mid-2022 and the States of Jersey Diversity Forum has just started running a marketing campaign to encourage candidates from diverse backgrounds to stand. 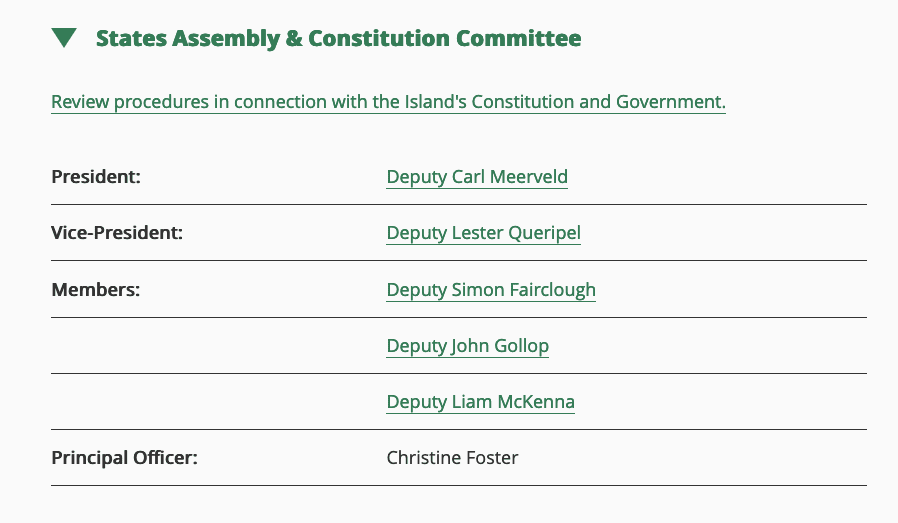 After general discussion, the President of SACC, Deputy Carl Meerveld, was pleased with the degree of alignment between Women in Public Life’s recommendations and SACC’s current thinking and said that SACC would engage again when the committee’s response to the election observers report and recommendations for the next election had been drafted.

As the Press said in a further article in Saturday’s paper “it looked and sounded like they [Women in Public Life] were pushing at an open door”. 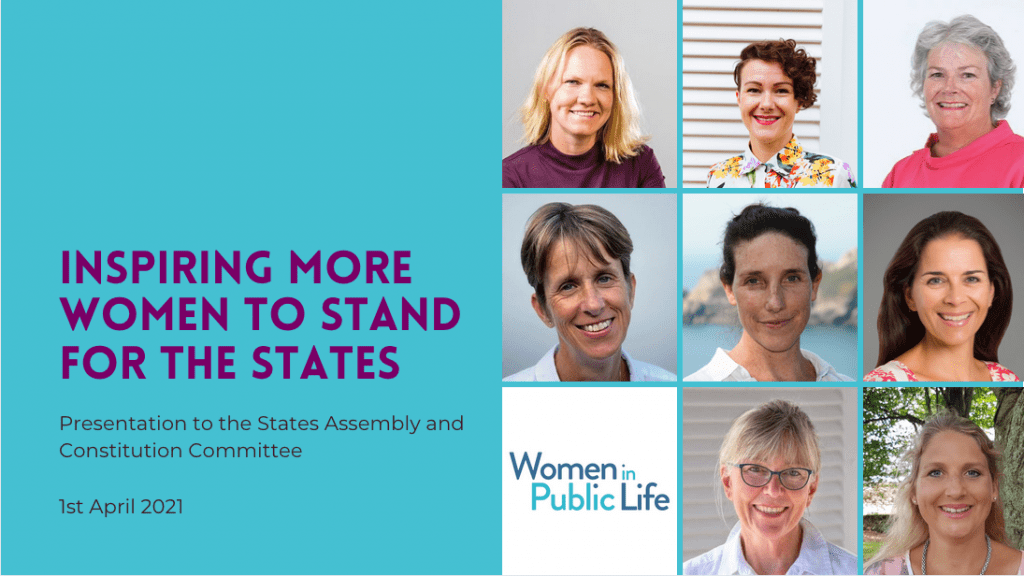