But tucked away in ‘Legislation for Approval’ was an interesting little ordinance that highlights just how much times have moved on – and yet they haven’t.

It’s called The Health and Safety at Work (Equality Provisions) 2021 Ordinance and, among other things, it updates The Quarries Safety Ordinance, 1954 to remove the terms ‘male’ and ‘competent male’.

Back in 1954 only ‘a male over the age of 18’ was allowed, by law, to be a machinery attendant and only a ‘competent male’ could oversee the lifting and transportation process, fire a shot (explosive) or inspect the workplace. 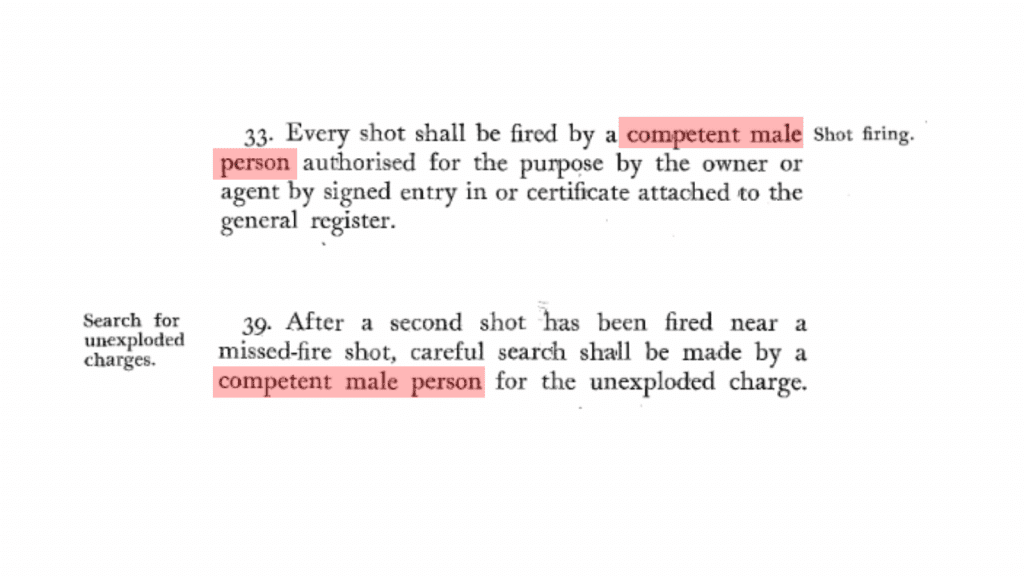 The Committee for Employment and Social Security wanted to make those responsibilities gender-neutral by removing all references to ‘male’ and ‘competent male’ in the old legislation, hence the ordinance. Hurrah!

However…. the ordinance left in place the many uses in the old legislation of ‘he’ and ‘him’. The quarry owner will still be referred to in law as ‘him’, as will the inspector and employees at the quarry. 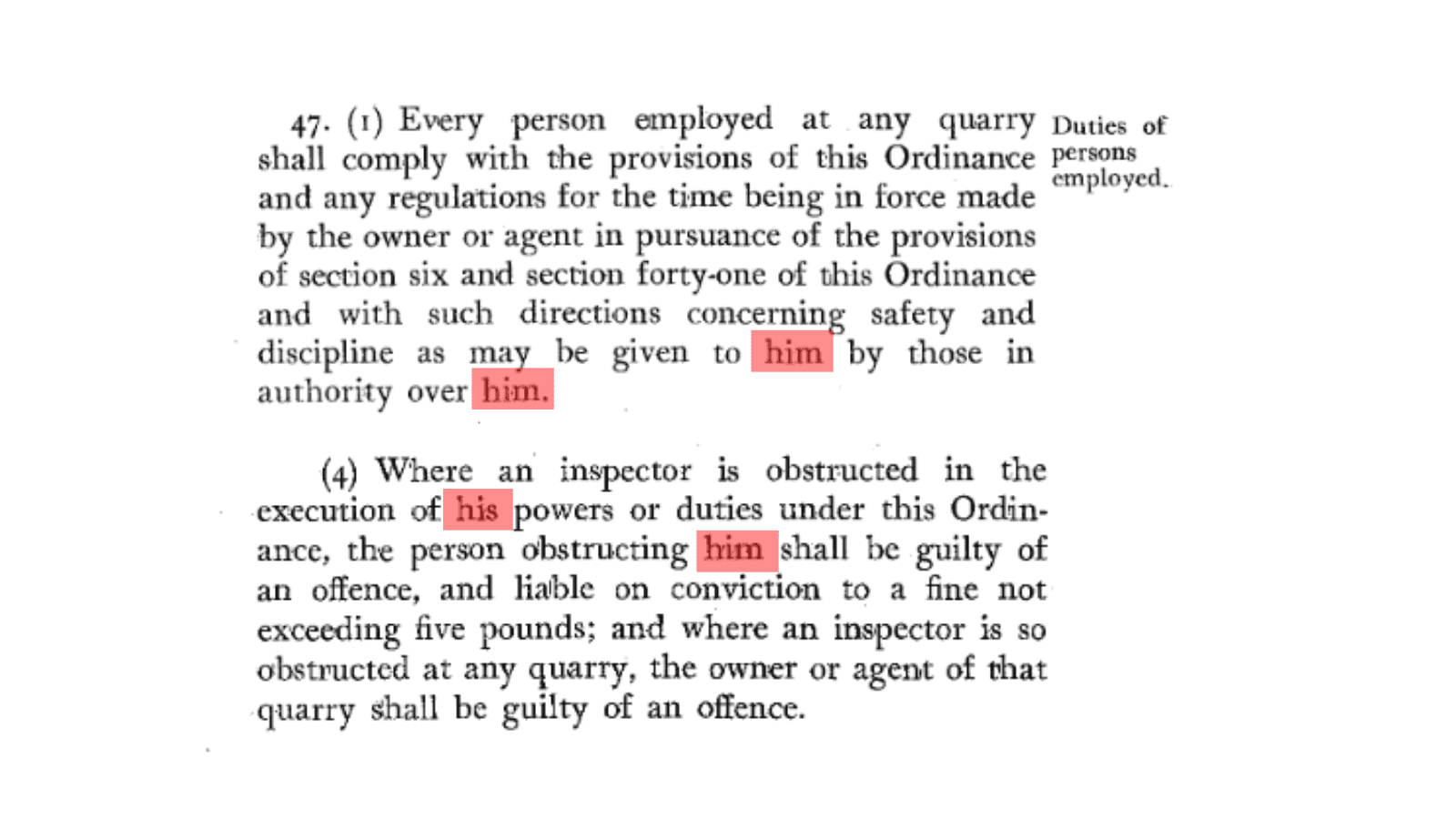 Why would any 2021 update to legislation not be fully gender-neutral? Because, since 2012, it has been the practice of Guernsey’s Law Officers to use gender-neutral language in new Projets de Loi (major legislation requiring the approval of the Queen) only. Updates to old legislation are not regarded as an opportunity to make those laws completely gender-neutral because of the additional drafting time required.

So even though this was an ordinance with ‘equality’ in the title, put forward by the Committee responsible for Guernsey’s proposed anti-discrimination ordinance, the references to ‘he’ and ‘him’ in health and safety at work legislation will remain.

Our Law Officers aren’t always great at sticking to their own rules. In July 2020, Deputy Dawn Tindall had to place a series of amendments, seconded by Deputy Chris Green, to have a package of financial Projets de Loi sent back to be made gender-neutral. You can read the details in this Guernsey Press article and follow the debate in Hansard for 15 July 2020 (starting on page 37).

Two days later Deputies Tindall and Green went on to successfully amend the Discrimination Ordinance proposals, adding a proposition instructing P&R to submit a policy to the States covering gender-neutral drafting in all new documentation including legislation. Plus, when updating any type of document, gender neutral language should be used and offensive terms to describe disability or any other protected ground should be replaced. This amendment was important as neither the States’ policy or the Law Officers’ practice on gender-neutral drafting has ever been written down. To read more, see Hansard, Friday 17 July 2020, starting on page 14.

Gender-neutral drafting in the UK

Guernsey’s move to gender-neutral drafting in 2012 was prompted by changes in the UK five years earlier. On International Women’s Day in 2007, Jack Straw MP, as Leader of the Commons, used a Ministerial Statement to announce that the Government had asked Parliamentary Counsel to stop, wherever practical, the convention that ‘the masculine gender includes the feminine’ as ‘many believe that this practice tends to reinforce historic gender stereotypes’.

Interestingly, gender-neutral drafting was common in the UK until 1850, when Parliament passed an Act ‘for shortening the Language used in Acts of Parliament’. The Act said that masculine words in legislation were ‘deemed and taken to include females’.

Note that gender-neutral drafting does not mean adding ‘she’ and ‘her’.  It’s actually the reverse – it means taking out ALL gender-specific pronouns and using terms like ‘the person’ instead so that the text is completely neutral. 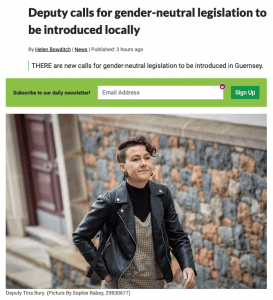 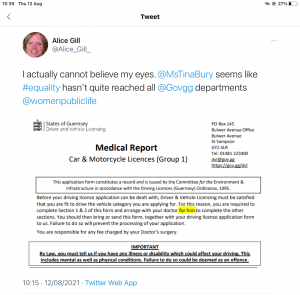 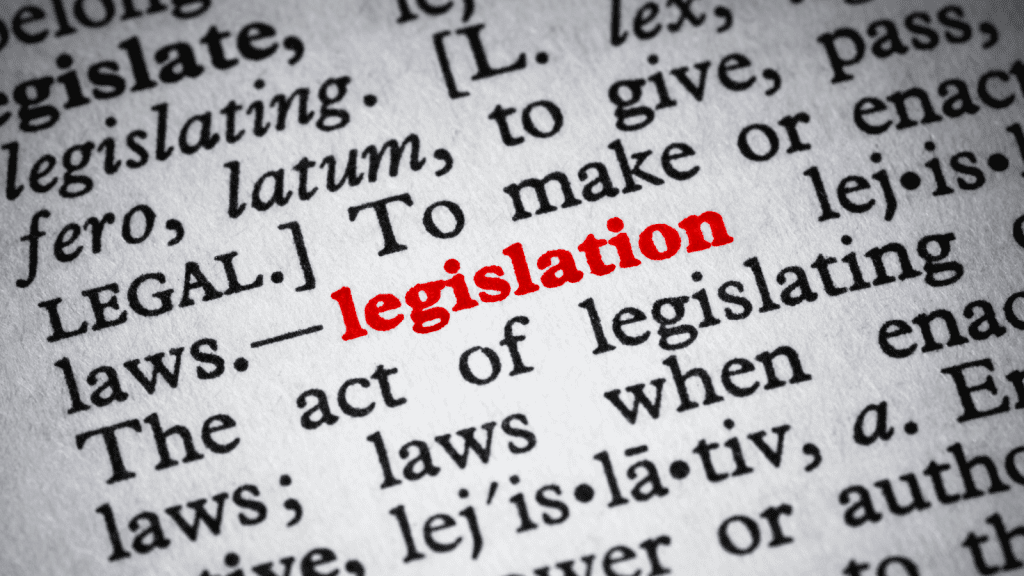