Meet the newly-appointed member of the Police Complaints Commission.

Find out all about the candidates for the St Peter Port by-election.

If you are short of time, just read these three articles:

If you want more detail, here’s a timeline of how the States property story developed, including Scrutiny’s questioning of Deputy Mahoney:

Deputy Dave Mahoney joined the States in October 2020 and was subsequently elected to the States most senior committee, Policy and Resources. He is the P&R lead for property.

On Monday 10 January 2022, the Guernsey Press published an open letter from Deputy Mahoney which he hoped would ‘shed some light on the behind the scenes work that is happening across the States’.

Click on each column below to read the contents. Or read the online version. 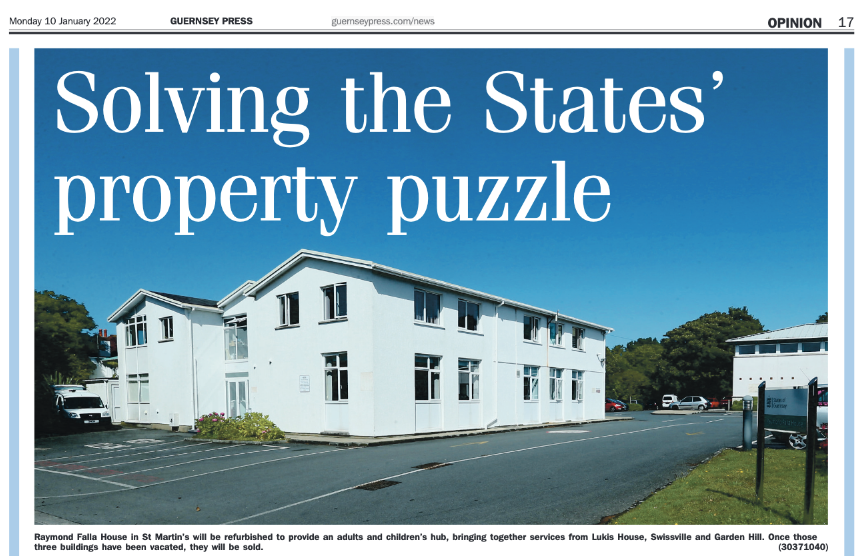 The Guernsey Press shone a spotlight on the letter with a front page story headlined ‘Plans for 90 new homes at Castel Hospital site‘, a video interview with Deputy Mahoney and a Comment column ‘A case for P&R to go it alone on property?’.

On Tuesday 11 January, the Guernsey Press comment column reflected on the initial public response: ‘States role in building homes needs clarity. Reaction to the plans was led by Deputy Peter Roffey in a Guernsey Press interview (Jan 11) and a letter to the Press (12 Jan).

On Wednesday 12 January, States property was again the topic for the Guernsey Press comment column: P&R losing out on the credit for KE VII plans (12 Jan) and the paper also featured a detailed interview with Deputy Victoria Oliver, President of the Development and Planning Authority. Bailiwick Express picked up on the story with interviews with Deputies Mahoney and Roffey in their ‘Fields around Castel Hospital are key to P&R’s scheme for new homes‘ piece.

As those stories were being read across the island that morning, members of the Scrutiny Management Committee (SMC) were settling into their seats for a public hearing with P&R to discuss progress on the Government Work Plan. In the course of the hearing (video below), Deputy Yvonne Burford, President of the SMC, took the opportunity to ask Deputy Mahoney:

Reaction to the Scrutiny hearing came in a Guernsey Press Comment column on Friday 14 January, ‘The dawn of a new politics of action‘.

The likely nail in the coffin of the plans came two weeks later on Saturday 29 January  when P&R officially distanced themselves:

P&R backs down on family homes near Castel Hospital (Guernsey Press, 29 Jan)
Castel homes plan could be over just weeks after it was launched (Bailiwick Express, 29 Jan)

Guernsey Party member, Deputy Nick Moakes, is still in support, however. On Monday 31 January, in a Guernsey Press opinion column titled ‘Guernsey’s housing crisis – what next?‘, he said a ‘very small’ amount of green land might be needed to resolve the housing crisis.

Relieved that P&R had backtracked, on Wednesday 2 February Deputy Peter Roffey, the chair of the States ‘Housing Action Group’, turned his attention to supporting GP11 in an interview with Bailiwick Express: ‘Claims about social housing policy GP11 are ‘complete moonshine’. GP11 is the planning policy that says that any development of 20 houses or more should contain a proportion of social or affordable housing. Deputy Victoria Oliver’s previous remark that developers can ‘kind of get around’ GP11 prompted Rule 14 questions from Deputy Lester Queripel, reported in the Bailiwick Express on Thursday 3 February: ‘Flexible GP11 “a mockery of policy – if developers can get around it”‘. On the same day, John Fernandez from BBC Guernsey reported that Deputy John  Dyke is “working on the Development and Planning Authority” to get rid of GP11 and will lead a requete if necessary: ‘Bid to scrap Guernsey’s affordable housing policy‘.

Along the way there was some reaction from other parties:

We’re looking for our Insta Guru – a volunteer who knows their reels from their stories and can take ownership of our Instagram channel.

Social media is hugely important to Women in Public Life. Facebook, Twitter and LinkedIn are the main ways we reach out to women in Guernsey. 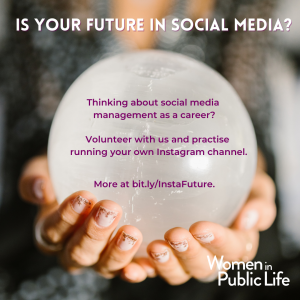 In 2022 we’re keen to ramp up our use of Instagram, exploring creative ways to build our relationships with young women in Guernsey.
Time commitment will vary, depending on the campaigns you are running, but will average about four hours a week. The hours are flexible, fit it in when it suits you.

If you are considering a career in social media management or digital marketing, this role would be a great way to build up your CV. Our team has a plenty of marketing and events experience and we are only too happy to share and learn.

To apply, send an email outlining your relevant skills and interests to Shelaine at hello@womeninpubliclife.gg. Closing date 31 March 2022.

Read user-friendly summaries of the content of the GWP and progress so far. 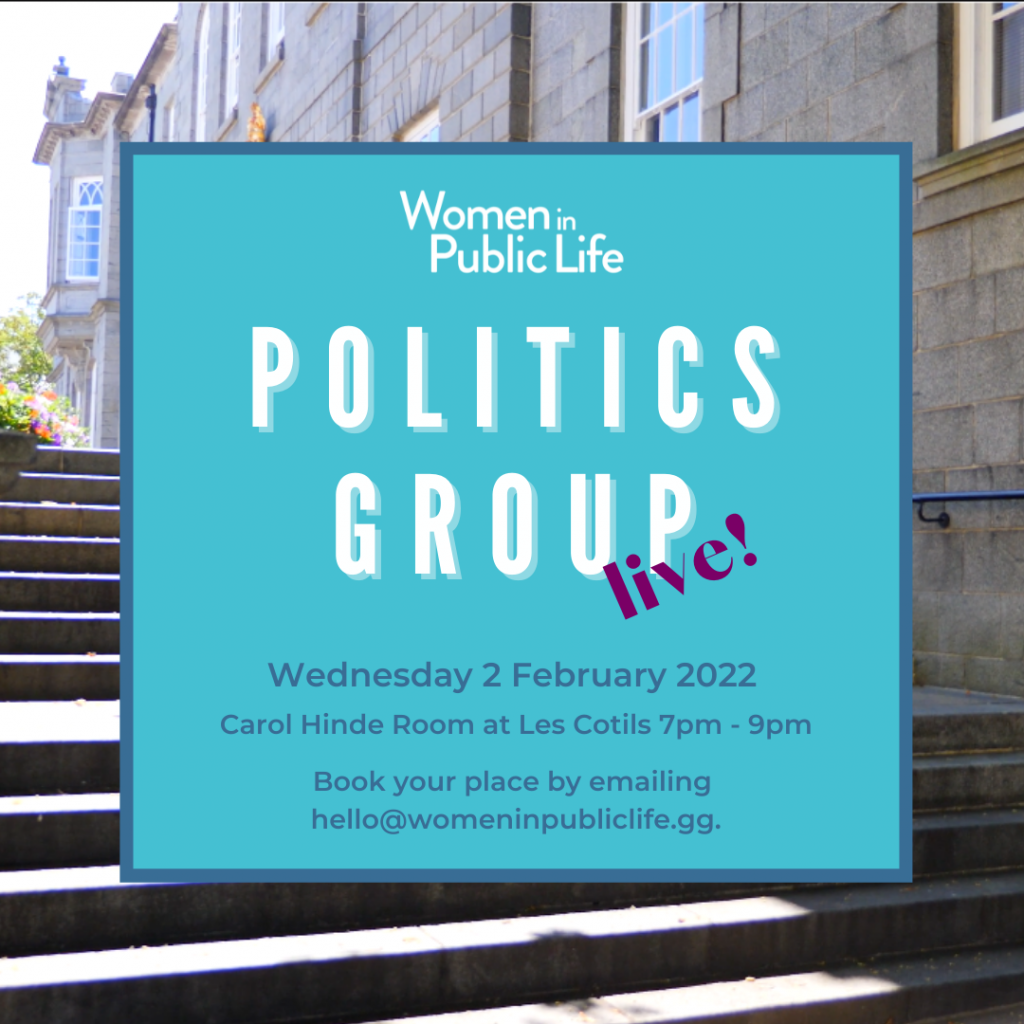 Do you follow Guernsey politics? Want to understand more about it? Join Women in Public Life’s Politics Group Live!

You don’t need to be a politics nerd. You’re just someone who cares about how the island is run. You keep an eye on the political stories in the media and want to share that interest with others in a welcoming, respectful environment.

Our first meeting will be on Wednesday 2 February at 7pm in the Carol Hinde Room at Les Cotils. The main topic for discussion will be Deputy Mahoney’s plans for the States property portfolio, including the Castel Hospital site. If that’s not a story you’ve been following, don’t worry, we’ve put together some background information.

Spaces are limited so if you would like to join us, reserve your place by emailing hello@womeninpubliclife.gg or sending a WhatsApp message to Shelaine. We appreciate that evening meetings can be tricky if you have caring responsibilities so if you’d prefer to join us by Zoom, let us know.

If you can’t make that date, be sure to email us anyway to be added to the mailing list for future invitations.

Chair of TRP Appeals Panel shares her experiences of being a tribunal member.