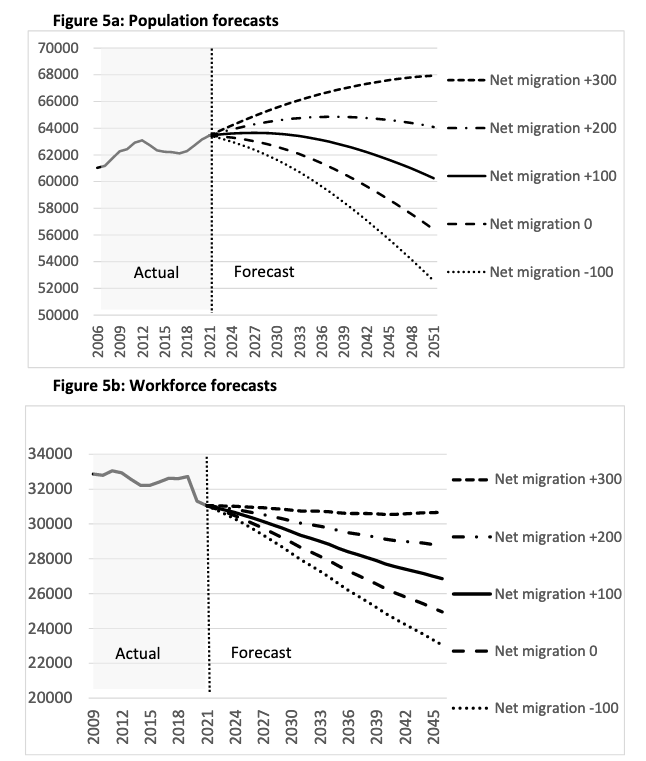 As a small island with limited resources, policy decisions that influence the size and make-up of our population are fundamental.

This review of Guernsey’s population and immigration policy was presented to the States for debate on 19 October by the Committee for Home Affairs. But it was developed by a steering group made up of members of P&R, Home Affairs, Economic Development, Education and Environment and Infrastructure. All propositions, as amended, were voted through on 21 October. Full voting records are HERE.

The key proposal related to net migration – the difference between the number of people who leave Guernsey and the number who come to live in Guernsey each year. For the purposes of planning the island’s housing needs, services, benefits etc the Review said we should assume net migration of up to 300 people each year for the next thirty years as this is what’s needed to maintain our working population. That would take our total population up to about 68,000 by 2051.

The Review recommends that Guernsey should widen its recruitment pool so that people can be recruited from across the world, not just Britain, Ireland and the EU. Guernsey has already negotiated to be able to allow a wider list of permitted roles than the UK.

In return, Guernsey needs to alter its population management regime so as not to become a ‘back door’ to the Common Travel Area, now that the UK has moved to a points-based immigration system with indefinite leave to remain after five years. A short-term one-year licence (STEP) will only be able to be renewed three times rather than five. Medium-term 5 year licences (MTEP) will be withdrawn and more long-term 8 year licences (LTEP), which are a route to remaining indefinitely, will be issued instead.

The Steering Group acknowledged that the emotive issue of ‘birth-right privilege‘ is potentially discriminatory and proposes a specific review of the routes to becoming a permanent resident, with recommendations by the end of the States term.

There’s no public-friendly version of this policy paper so the best ‘summary’ is the list of propositions and the executive summary at the beginning of the policy letter.

The main resistance to the proposals in the Review came from those who want to see the States take active steps to increase participation in the workforce by our current population (see media articles 6-9 in the list below).

There were six amendments lodged prior to the debate. See ‘Propositions and Policy Letters’ HERE.

Topline results of the votes are shown below. Full voting records are HERE.

Amendment 1 (De Saus & Haskins) – proposed that work is undertaken to better assess the resources that will likely be required to enable the States to effectively plan for the strategic population objective, and to resource that work accordingly. CARRIED 22-10.

Amendment 2 (KMiller & Soulsby) – proposed to note that the Human Capital Development Plan will include workstreams to improve economic and social participation of islanders through a variety of policy levers and that this work may reduce the requirement for the net migration level identified. LOST 14-15.

Amendment 3 (KMiller & Soulsby) – sought to give a policy direction the Committee for Home Affairs to explore any options to treat CTA (common travel area) residents differently because they are not bound by the same immigration restrictions. LOST 10-22.

Amendment 4 (KMiller & Soulsby) – directed the Committee for Home Affairs to explore ways under which it could have further flexibility to expand the LTEP (long term employment permit) list when required to address labour shortages. LOST 8-23.

Amendment 6 (Roffey & De Saus) – proposed that P&R coordinate an investigation into measures to optimise the economic participation of Guernsey’s resident population and to increase, wherever possible, the productivity of the island’s workforce. CARRIED 19-8.

The Committee for Home Affairs objected to amendments 3, 4 and 5, see media release HERE.

A further two amendments were lodged during the debate:

The review in detail

If you can, read the policy letter in full – it’s an interesting introduction into how managing the population works in the island.

If reading the whole thing is too much, focus on:

‘Birth-right privilege’ is explained in Appendix 4 on page 51.