In 2021 the States decided the Island’s priorities for the subsequent four years.

The first outline stage of the process was in March 2021. Stage 2 was published on 16 June 2021 and was debated at the States meeting that started on Wednesday 21 July. States media release.

Prioritisation exercises are common in the States – in the past you may have heard of the P&R Plan or the States Strategic Plan. But this version, called the Government Work Plan, is particularly significant and worthy of everyone’s attention because it comes directly after the upheaval and financial impact of both Covid-19 and Brexit.

What’s included in the Government Work Plan (and what’s left out) will have a material impact on all of our lives. Compromises and difficult decisions have been made to agree a Plan that is achievable and affordable, yet ambitious enough to kickstart Guernsey’s recovery.

We created this resource page to help you follow the Government Work Plan as it develops, and update it regularly with links to relevant documents, videos and media articles. Because we’re Women in Public Life, we’ve paid particular attention to the involvement of female Deputies to give you an idea of what you could expect if you were elected to serve your Island. 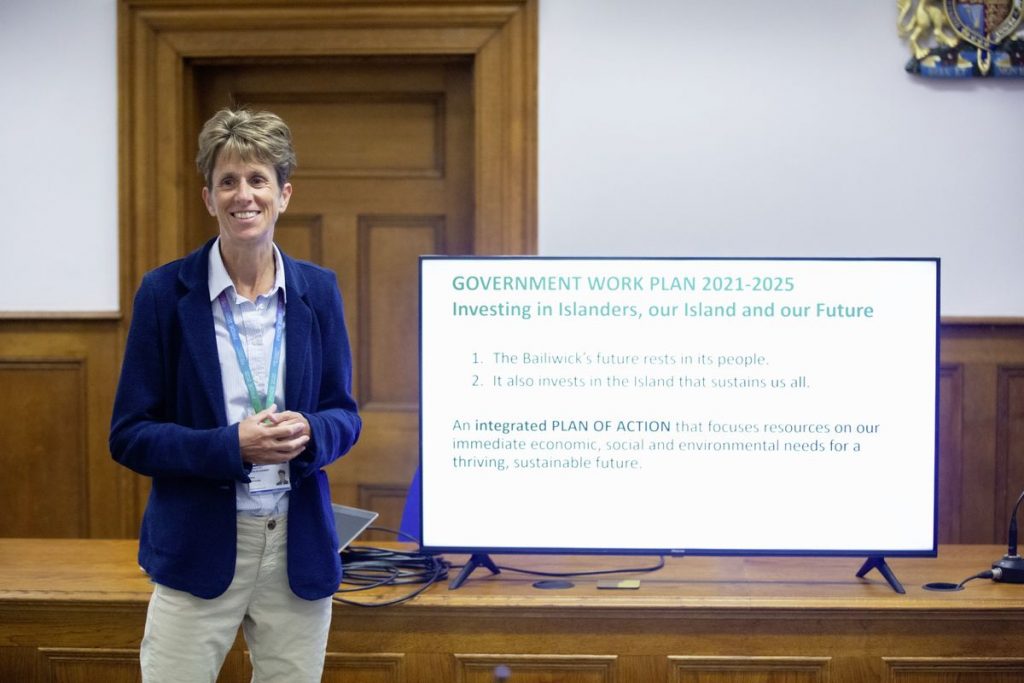 What's in the Plan?

A user-friendly summary of the Government Work Plan and a report on progress were published on 20 January 2022.

Click on the front pages below to read them.

The Billet containing the full Government Work Plan is HERE.

It was a wide-ranging and interesting session, covering development plans for States property assets, broadband rollout, air and sea links, and the tax review.

Here are some of the media stories the hearing generated:

Watch the Scrutiny Management Committee put questions to the Policy and Resources Committee about progress on the Government Work Plan. 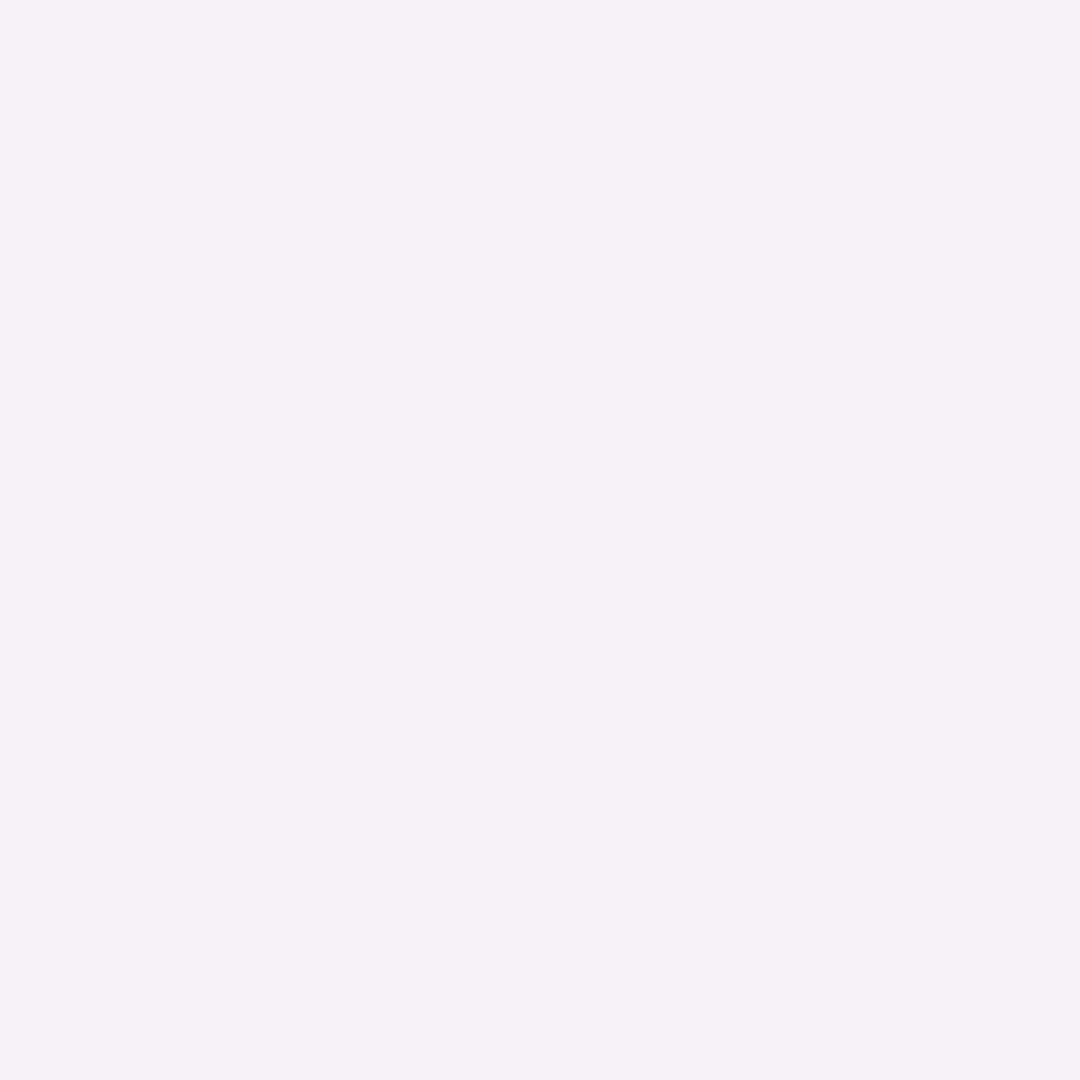 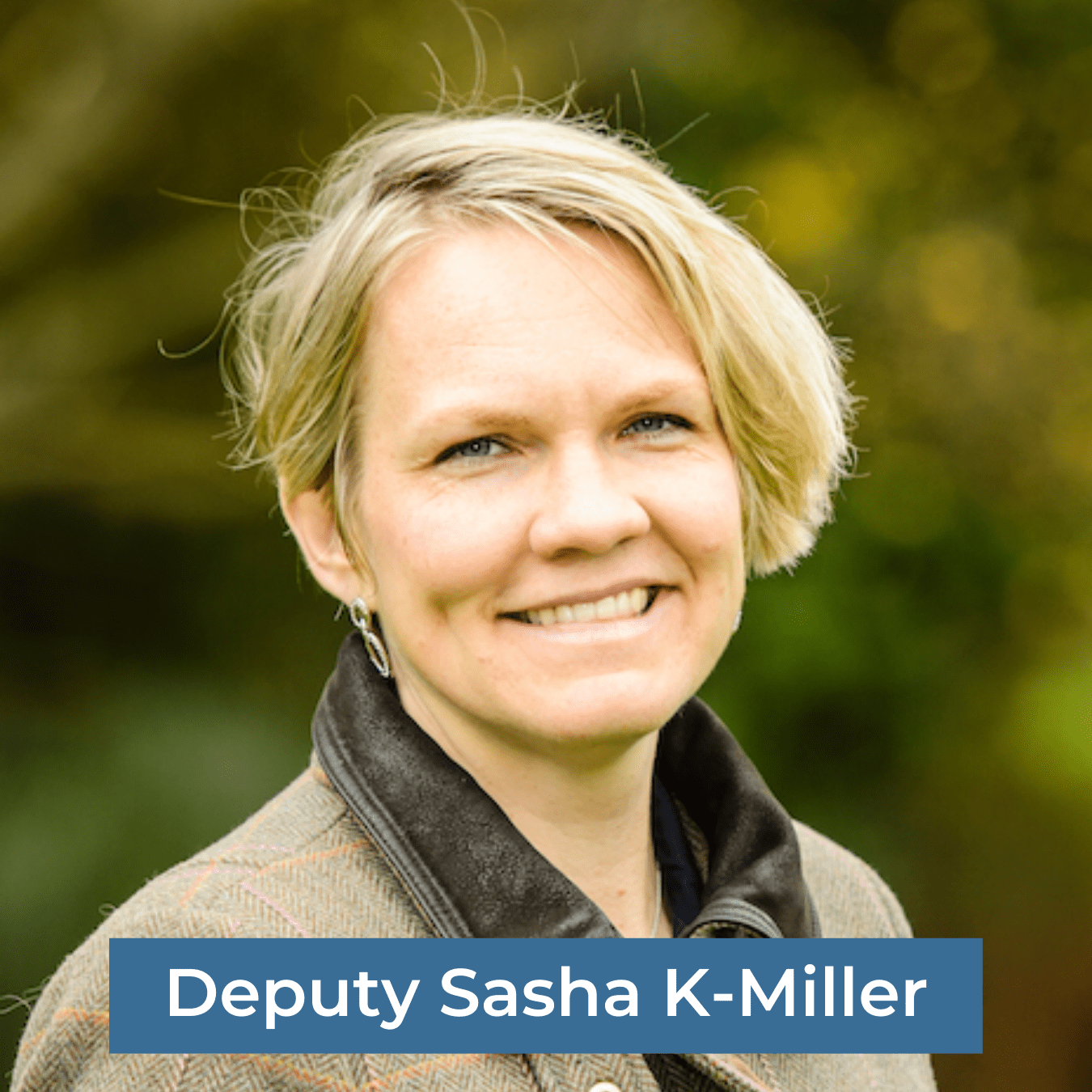 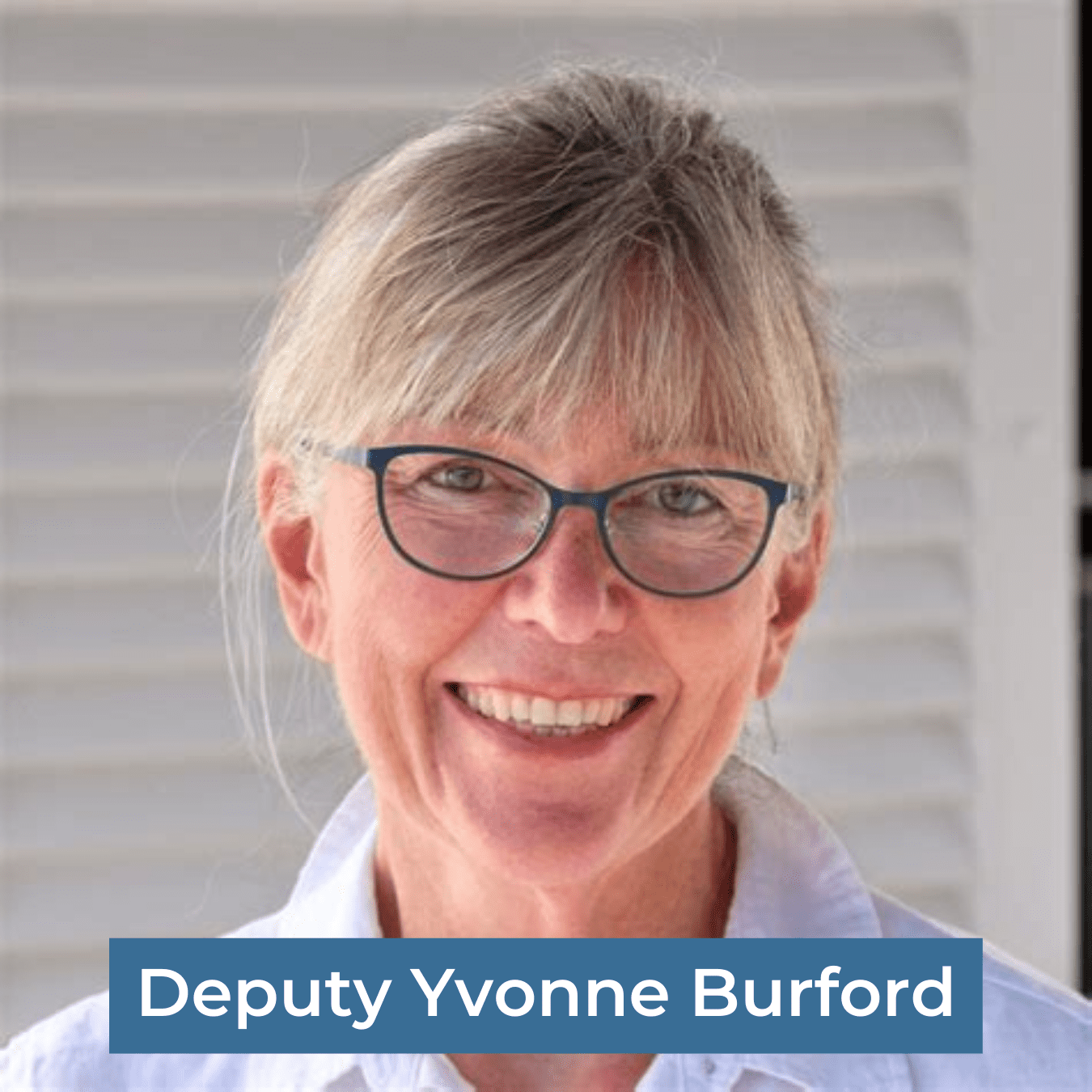 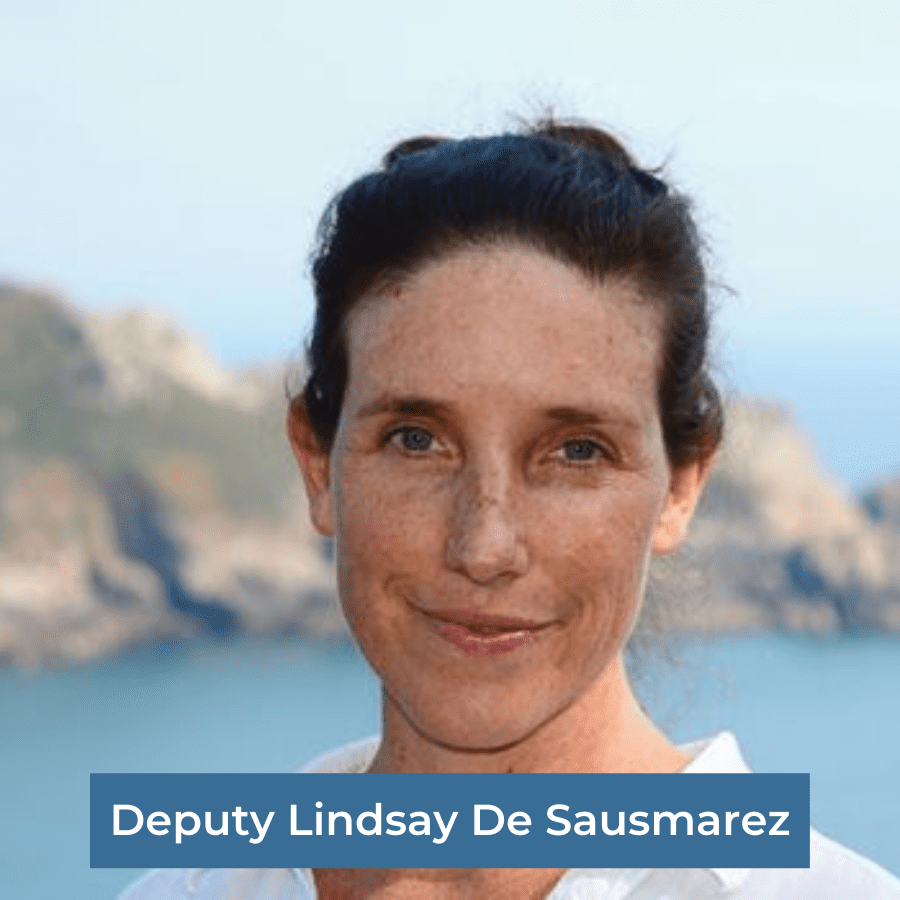 Policy and Resources led the original development of the Plan, with the input of all of the committees of the States. But no matter how collaborative the process, when the Plan was debated in July 2021 there were still aspects that Deputies wanted to change or add to. They did this by lodging amendments – these were debated first.

If you want to study the detail of the debate, you can read the original proposals and amendments, watch the debate, analyse the voting records and download the Hansard report HERE.

Twelve amendments to the Plan were submitted altogether but Amendment 10 (WON) and Amendment 11 (WON) were on technicalities so there were ten significant ones.

Two of the ten amendments were led by Deputy Sasha Kazantseva-Miller. Amendment 3, seconded by Deputy Yvonne Burford, related to the way in which the GWP workstreams will be managed. P&R wants to create a standardised governance structure for each workstream. Sasha and Yvonne believe that committees already have well-established ways of managing significant workstreams so P&R’s new structure isn’t necessary. LOST 13-23.

In Amendment 7, Sasha and her seconder, Deputy Gavin St Pier, proposed that the States should not agree to borrow a further £200m until it is clearer what direction the Assembly wants to take on taxation in the future. A review of Guernsey’s taxation system is due for debate in September 2021. LOST 9-27.

In Amendment 8, Deputy Lindsay De Sausmarez wanted to reinstate the review of the delivery of Primary Education as a priority during the life of the Plan. Her amendment was seconded by Deputy Steve Falla. LOST 10-27.

Lindsay also seconded an important amendment in relation to closing Guernsey’s Gender Pay Gap. The Plan puts legislation for Equal Pay for Work of Equal Value on the back burner, not to be worked on until 2026. Amendment 2, led by Deputy Peter Roffey, sought to bring that start point forward to 2022/23, arguing that it make sense to do the policy work at the same time as replacing Guernsey’s Sex Discrimination in Employment Ordinance. LOST 18-19.

In total, Deputy Yvonne Burford seconded three amendments. As well as Sasha’s governance amendment (3, see above), she also backed Deputy Gavin St Pier’s proposals that (a) initiatives such as public private partnerships should come back to the States for approval (Amendment 5) LOST 15-23 and (b) P&R should be able to approve capital projects up to £10m, rather than the unlimited sum proposed (Amendment 6). LOST 18-20.

As the proposing committee, P&R are allowed to lodge amendments at any time. One such late amendment, seconded by Deputy Heidi Soulsby, was a compromise proposal in relation to funding for drugs for cancer and other serious conditions, referred to as ‘NICE TAs’. In January 2020 the States agreed to fund drugs with an ICER of £30,000, going up to £40,000 after a review. Guernsey’s financial circumstances have changed since then so the GWP delays that review until 2026. Amendment 12 was in response to Amendment 1 (see below) and would have brought that review forward to 12 months after the roll-out of NICE TAs with an ICER of £30,000. LOST 17-20.

In addition to the seven amendments proposed or seconded by female Deputies, there were three further amendments:
Amendment 1 – to fund drugs with an ICER of £40,000 in this States term (Roffey/Queripel). LOST 21-17
Amendment 4 – to reinstate the review of palliative and end of life care as a priority for this States term (St Pier/Roberts). WON 23-13.
Amendment 9 – to make ‘replacing CCTV systems’ a pipeline project to be scoped in this States term (Prow/Vermeulen). WON, no recorded vote.
PROPOSITIONS
The Government Work Plan passed the States on the afternoon of Friday 23 July 2021. All of the propositions (as amended) were agreed, mostly by large majorities. The largest resistance was to Proposition 14, with 17 Deputies voting ‘contre’. List of amended propositions.
Details of the voting are currently laid out on the govgg Twitter feed and the States meeting page will be updated with the recorded votes shortly.
Media around 2021 debate

‘Recovery actions run through every thread’.

‘It’s for all States members to own the plan’.

‘Better access to drugs ‘will help thousands of islanders”

”Now is the time’ for a Sexual Assault Referral Centre‘

‘Our safety trumps any work plan‘.

‘10 years or more for Equal Pay for work of Equal Value‘.

‘660 spare places in our primary schools‘.

‘Attempt to prioritise primary review “wins the argument but loses the vote”‘.

‘Higher taxes warning – ‘we have no choice”.

‘“Health will be at the centre of our economic growth”‘.

‘The motherhood penalty‘ and ‘I felt betrayed by the law for not protecting us‘. (Original 4-page supplement refers to the omission of plans to update maternity and adoption leave from the Government Work Plan). 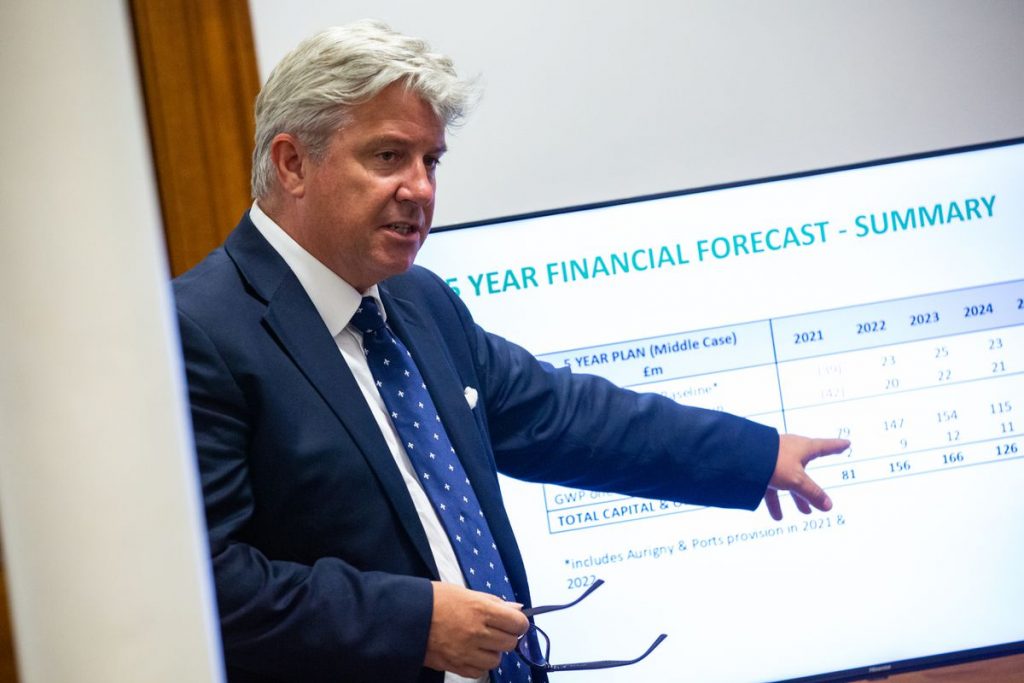